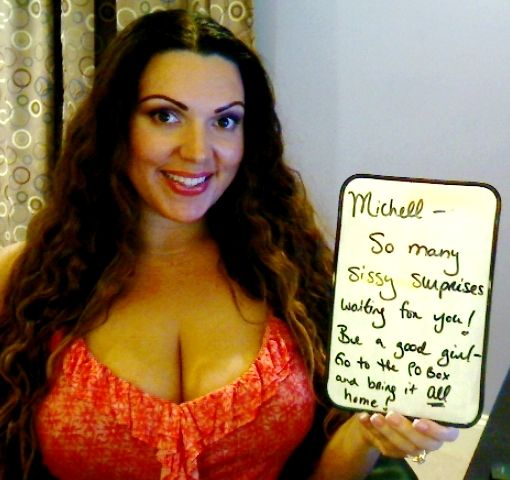 Sissy Michell knows I can turn on her security cam and check up on her whenever I want... so my sissy girl makes sure she always has on pretty panties... and as soon as the wife Taco leaves, I have her slip into Taco's clothes. Here she is wearing some of Taco's blouses and skirts. I also made her put on a leopard print nightgown and walk outside to pull a branch off the tree in her front lawn. My good girl sent me $1,840.


Sissy David - My Financial Slave Del sent me $4,505 as I encouraged her to take the next step and walk out of her apartment in the pretty blue dress I picked out for her. My good girl knows she was born to serve me. I give her purpose by letting her work for me - giving me money and buying me presents. My good girl will do whatever it takes to make me happy.

Whipped Puppy knows he will never be strong enough to resist my cleavage. So weak, so whipped...he knows my cleavage induced aching always wins out. Puppy sent me $1,450, because he must obey.
----


TDY knows he can't make financial decisions without me. Since I'm the boss and I make the rules... I decided he should send me $630.
---

JimG knows that even if he sometimes wants to, he's not allowed to say no to his Princess. I enjoyed making him send me $845 while reminding him how good it feels to be my good boy.
---

Fist Fucker Fay loaded up on Vaseline and Vodka and opened $560 in humiliating PTV vids. Every time he tells me he can't afford to open any more, it just makes me want to make another quick vid to tease him and drain him harder. He always says I'm such a cruel, greedy, beautiful bitch... and I just laugh and tell him I know how bad he needs my attention and my abuse. He loves me, he hates me, but he can't stay away:)
------------------------

Sub Josh continues to be so weak for my cleavage, he can't stay away either.
--

Brainwashed Matt can't get out from my cleavage control.
---


Sub BNY bought my blackmail app a year ago, filled it out, but was too scared to send it back. He finally got the courage to send it to me while on the phone. He's not in any kind of contract, but I did enjoy having him send me tributes and buy all my NF Goodies while on our long call...and of course leaving him denied:)
-----------

JNT goes crazy for my blackmail games. He gets so worked up thinking about being owned, control, and exposed by me, I can get him to agree to anything I want.
----------------

BenG is so scared of being blackmailed, he'll pretty much call to check in whenever he sees me online. The funny thing is... I've never threatened to "blackmail" him... and with all of my bitches, it's just a fun fantasy to play around with (( but of course I make them pay whatever we agree to ))
-----------
----

Fleshlight Al had to go out and buy a new blow up girlfriend since he popped his old one last time we spoke. Of course I enjoyed laughing at the loser as he really gave it to her. He thanked me with a tribute afterwards.
-----

Vegas David called so I could laugh as he made a mess in his panties. Of course we kept those wet panties on while out doing business the rest of the night.
----

Sub Alex hasn't had sex in 20 years... what he really needs is my humiliation and financial domination.
--------

Scottish Andrew the popping slave stopped by for a quick session.
--

Tranny Cock Sucker Carlos loves when I encourage him to be the best cock sucker he can be.

Jimmy the Jew called a few times... I had him barking like a dog at my feet.
--

Foot Slave James is always hiding from his wife so he can sneak calls to serve me. He knows I don't care about her... I come first.
-------

Cupcake Sissy puts on his pretty pink panties and collar when it's time to call and serve me. He knows I like him dressed up pretty.
-----


Cowboy A continues to serve whenever he can...if he can't call, he still surprises me with tributes. Even while traveling, my good boy still checks in with me every day.
--------------

Since I've been gone for so many days at a time on and off this summer, Loser Mark (the pastry fucker) will take whatever time he can get with me... even if that means having to skip out of a work meeting early and rush to his car while I make him tribute and raise the rate on him. Or sometimes he'll have to hide in his bathroom at home and whisper while performing humiliating tasks on cam for me. Such a loser ;)
--------------------

Chicago Mikey's summer will probably include a lot of gay wrestling ... of course he'll be the loser and probably end up getting his face smothered with cock and balls...just how he likes it;) I'm looking forward to seeing him in his new pink singlet.
-------

3 pics for my foot slaves