OMG she finally updated her journal ;)

Sissy Michell isn't going to let the wife, Taco ruin our fun. Even though a snooping Taco found (and threw out) a bag full of dresses, night gowns, and a chastity cage...there is plenty more where that came from...and it was just another excuse for me to do even more Sissy Shopping for Michell. My good girl encouraged me to do some Amazon shopping for myself and handed over an extra $650 in tributes. Then she surprised me with a $200 Victoria's Secret gift card. 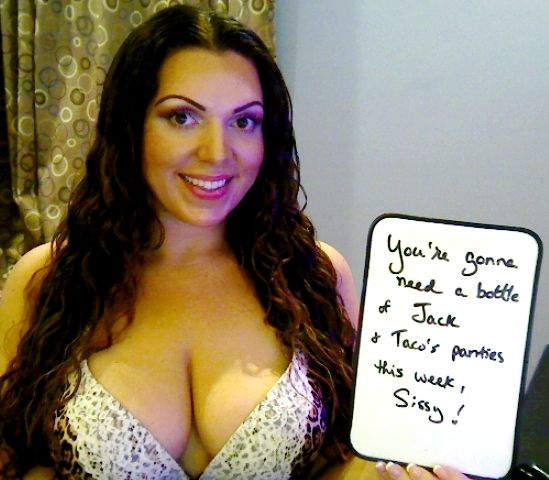 Sissy Slave Del stopped by for a couple training sessions and sent me $1,000 because she knows how good it feels to give to me. Sissy would be lost without me, I give her purpose.
------

Sissy Slut Jenny has been doing such a good job following my rules and proving that she can be my good girl and not just a slut.

Being the BOSS of TDY is so much fun. Especially when it comes time to decide how his cash and credit cards should be used. I decided he should send me $1,070. and then I did a lil shopping on his cards. He gets So excited when he checks the balance and sees I went shopping whenever I feel like it.
-----------

New boy "Trix" found me on YouTube and just had to call me on NiteFlirt. I had him in the zone, focusing and tributing. He ended up sending $200 in tributes and spent another $160 on the call. That's it... just click and pay...

New Loser Chad called for some raise the rate fun.

Fist Fucker Fay spent $240 on humiliating clips telling him just how pathetic he is. Of course he had to keep coming back for more.
-----------

Sissy Damian is getting closer to whoring himself out on Craigslist (with my help..sometimes sissies just need a lil push ;)
----------

Blackmail Bitch Bill calls pretty often after I made him send me pics from the glory hole. I think it's time he creates a NF listing so I can start whoring him out to the boys and of course sending me all of his earnings:)
-------------------

Speaking of cock suckers... Chicago Mikey has his eye on some tranny cock. At least he's not pretending it's just about wrestling. I have a feeling the tranny he meets will have him on his knees in no time ;)
----------------

Cuck Skylar called to be humiliated. I kept him on the phone for a while, but when I was done with the lil dick loser, I made him hang up and tribute his remaining balance.
------------------

Cowboy A wants to be a better boy for me. He's doing a good job so far.. stepping up the tributes and calling to check in more often... even if that means he has to sneak a call to serve his Mistress.

Loser Mark and 1HB have both stepped it up lately. I think it's time for a 3way with both of their wallets.
Hmmm...how should I make my boys entertain me?;)

3 pics for my foot slaves